Visitors are advised to check for opening before visiting an attraction as some may be closed due to COVID-19.

Sydney, city, capital of the state of New South Wales, Australia. Located on Australia’s southeastern coast, Sydney is the country’s largest city and, with its magnificent harbour and strategic position, is one of the most important ports in the South Pacific. 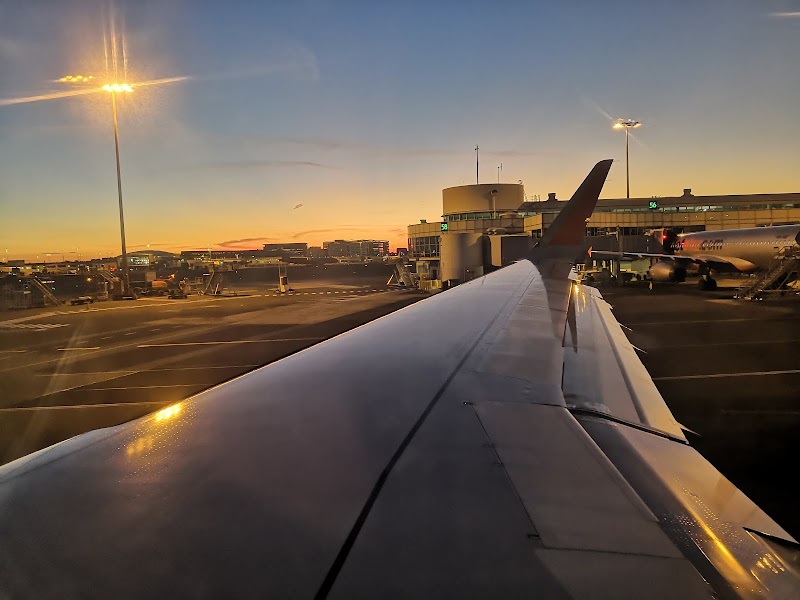 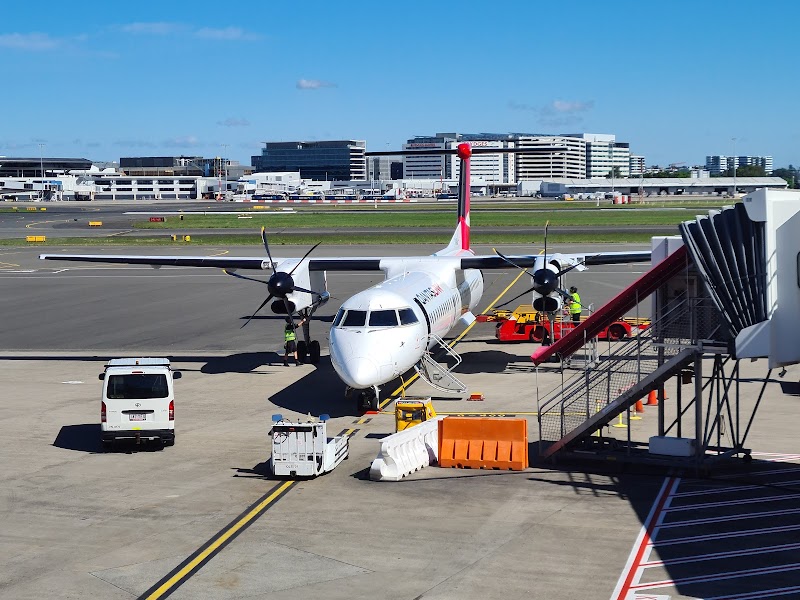 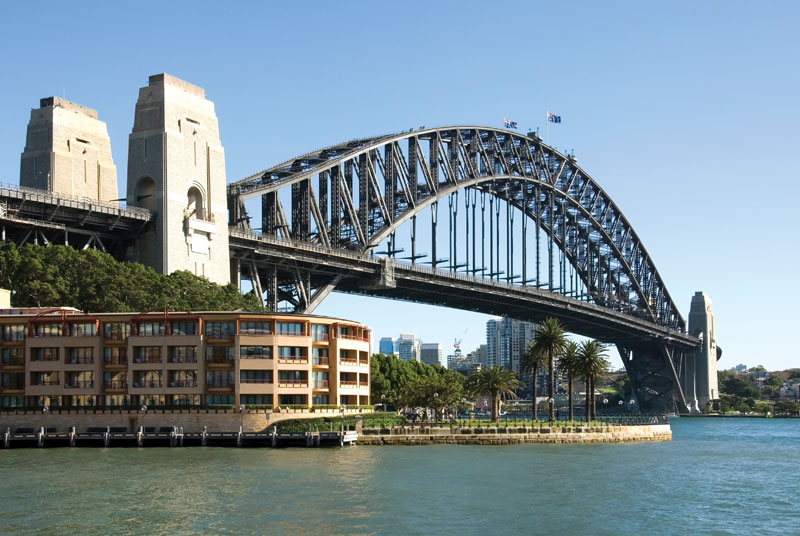 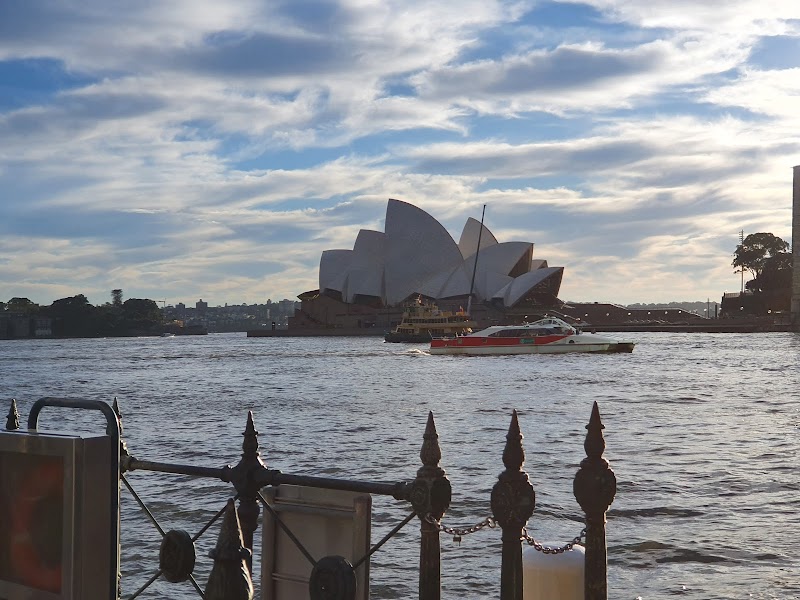 The Rocks is an urban locality, tourist precinct and historic area of Sydney's city centre, in the state of New South Wales, Australia. It is located on the southern shore of Sydney Harbour, immediately north-west of the Sydney central business district. 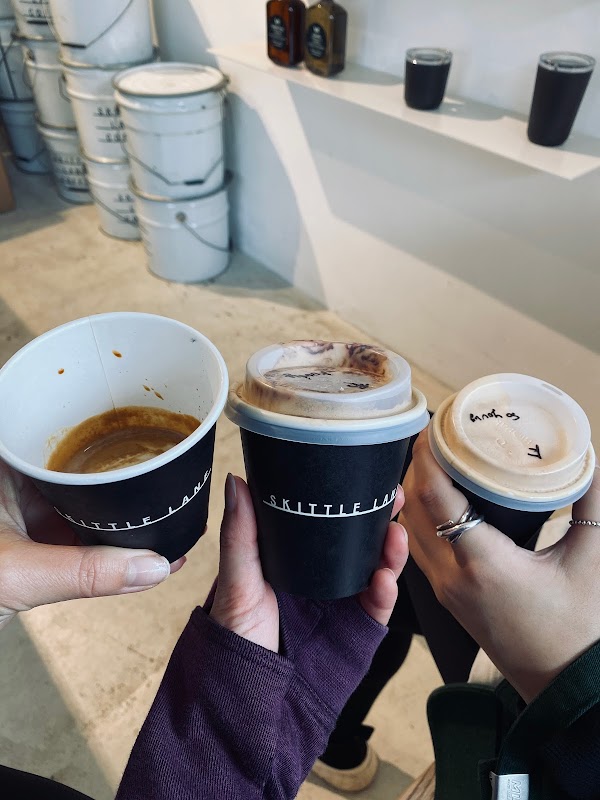 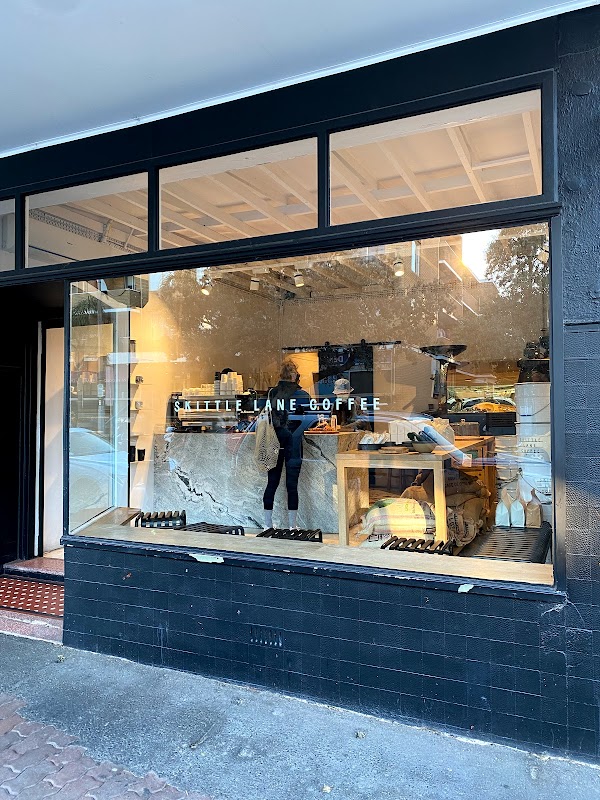 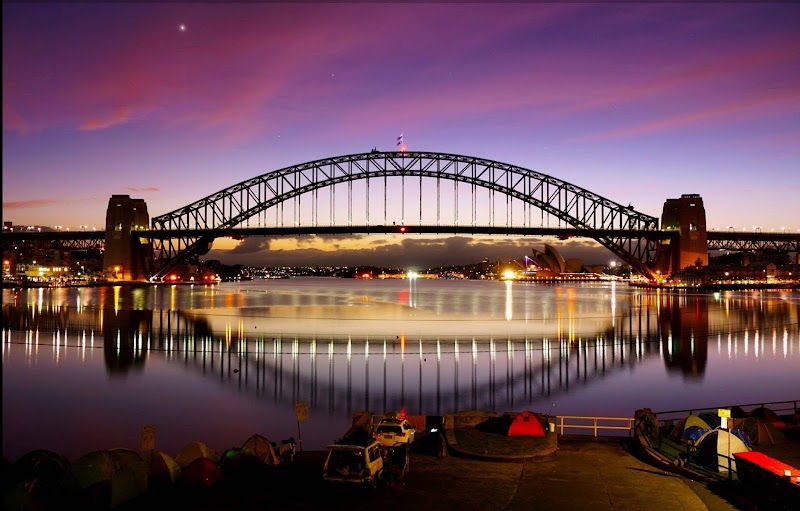 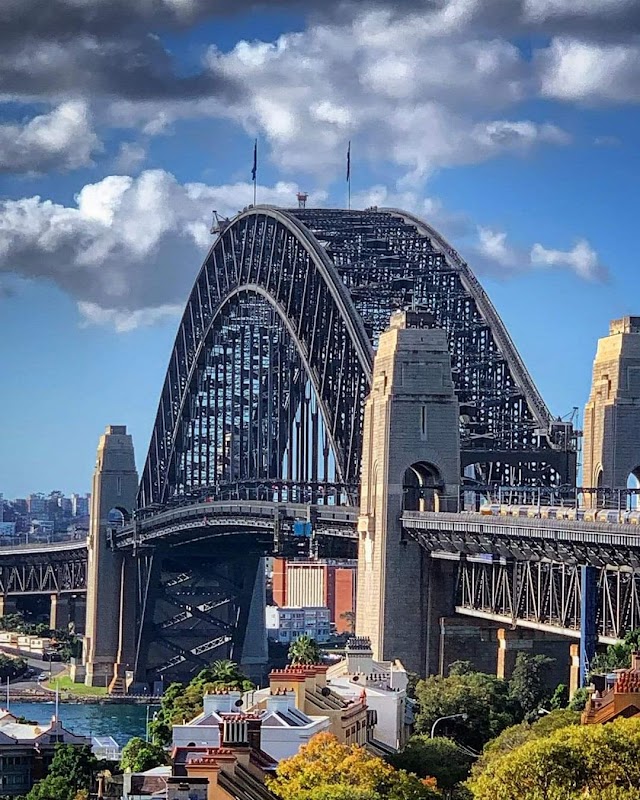 The Sydney Harbour Bridge is an Australian heritage-listed steel through arch bridge across Sydney Harbour that carries rail, vehicular, bicycle, and pedestrian traffic between the Sydney central business district (CBD) and the North Shore. The view of the bridge, the harbour, and the nearby Sydney Opera House is widely regarded as an iconic image of Sydney, and of Australia itself. The bridge is nicknamed "The Coathanger" because of its arch-based design.Under the direction of John Bradfield of the New South Wales Department of Public Works, the bridge was designed and built by British firm Dorman Long of Middlesbrough (who based the design on their 1928 Tyne Bridge in Newcastle upon Tyne) and opened in 1932. The bridge's general design, which Bradfield tasked the NSW Department of Public Works with producing, was a rough copy of the Hell Gate Bridge in New York City. This general design document, however, did not form any part of the request for tender, which remained sufficiently broad as to allow cantilever (Bradfield's original preference) and even suspension bridge proposals. The design chosen from the tender responses was original work created by Dorman Long, who leveraged some of the design from their own Tyne Bridge which, though superficially similar, does not share the graceful flares at the ends of each arch which make the harbour bridge so distinctive. It is the eighth longest spanning-arch bridge in the world and the tallest steel arch bridge, measuring 134 m (440 ft) from top to water level. It was also the world's widest long-span bridge, at 48.8 m (160 ft) wide, until construction of the new Port Mann Bridge in Vancouver was completed in 2012.The Sydney Harbour Bridge went on to be added to the Australian National Heritage List on 19 March 2007 and to the New South Wales State Heritage Register on 25 June 1999. 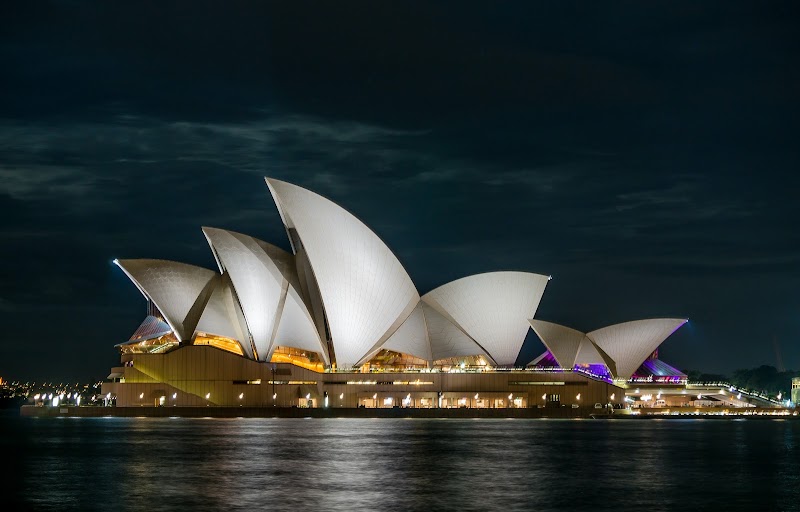 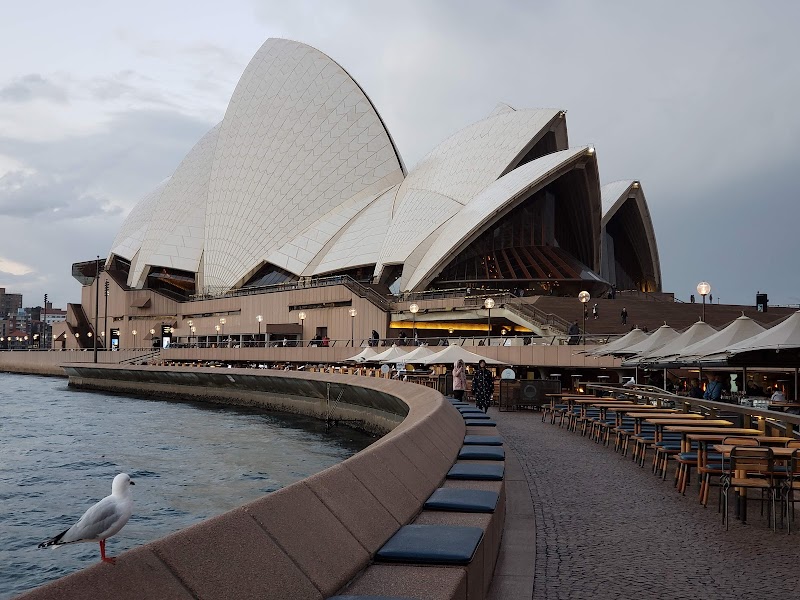 The Sydney Opera House is a multi-venue performing arts centre on Sydney Harbour located in Sydney, New South Wales, Australia. It is one of the 20th century's most famous and distinctive buildings.Designed by Danish architect Jørn Utzon, but completed by an Australian architectural team headed by Peter Hall, the building was formally opened on 20 October 1973 after a gestation beginning with Utzon's 1957 selection as winner of an international design competition. The Government of New South Wales, led by the premier, Joseph Cahill, authorised work to begin in 1958 with Utzon directing construction. The government's decision to build Utzon's design is often overshadowed by circumstances that followed, including cost and scheduling overruns as well as the architect's ultimate resignation.The building and its surrounds occupy the whole of Bennelong Point on Sydney Harbour, between Sydney Cove and Farm Cove, adjacent to the Sydney central business district and the Royal Botanic Gardens, and close by the Sydney Harbour Bridge. The building comprises multiple performance venues, which together host well over 1,500 performances annually, attended by more than 1.2 million people. Performances are presented by numerous performing artists, including three resident companies: Opera Australia, the Sydney Theatre Company and the Sydney Symphony Orchestra. As one of the most popular visitor attractions in Australia, the site is visited by more than eight million people annually, and approximately 350,000 visitors take a guided tour of the building each year. The building is managed by the Sydney Opera House Trust, an agency of the New South Wales State Government. On 28 June 2007, the Sydney Opera House became a UNESCO World Heritage Site, having been listed on the (now defunct) Register of the National Estate since 1980, the National Trust of Australia register since 1983, the City of Sydney Heritage Inventory since 2000, the New South Wales State Heritage Register since 2003, and the Australian National Heritage List since 2005. Furthermore, the Opera House was a finalist in the New7Wonders of the World campaign list. 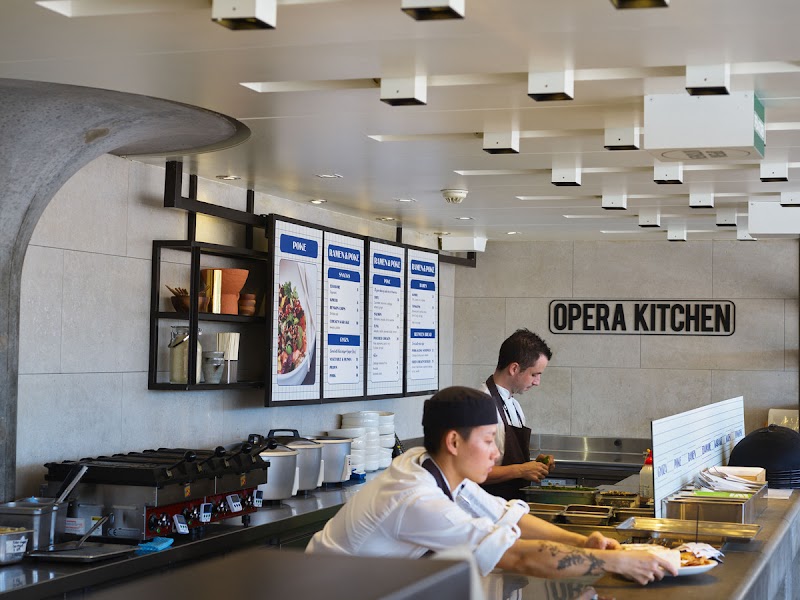 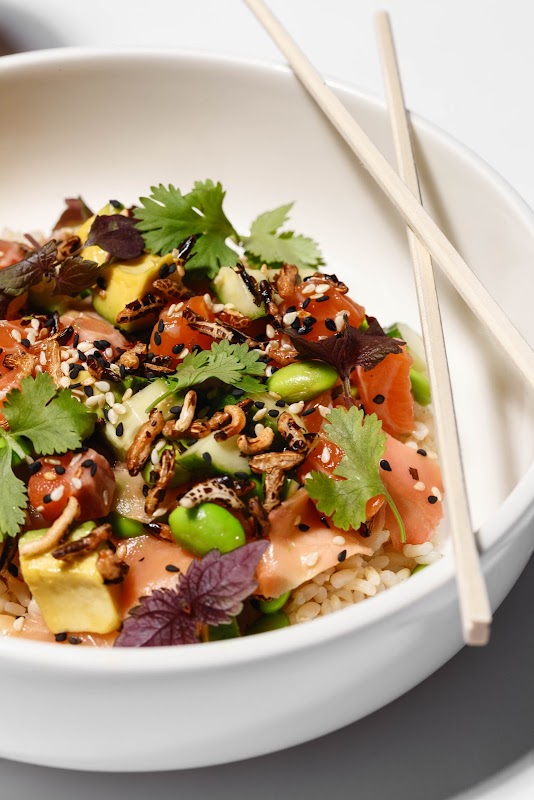 This is your chance to do a full tour of the Sydney Opera House and combine it with lunch or dinner at the Opera Kitchen. 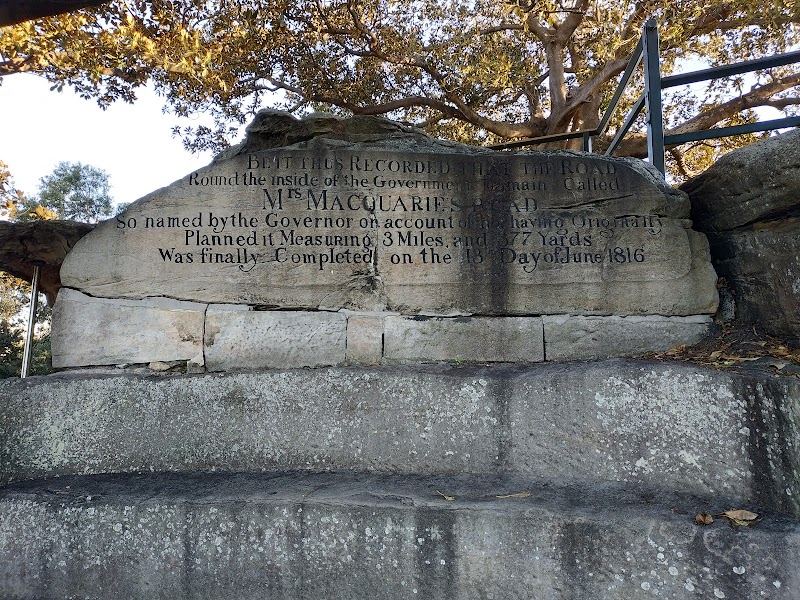 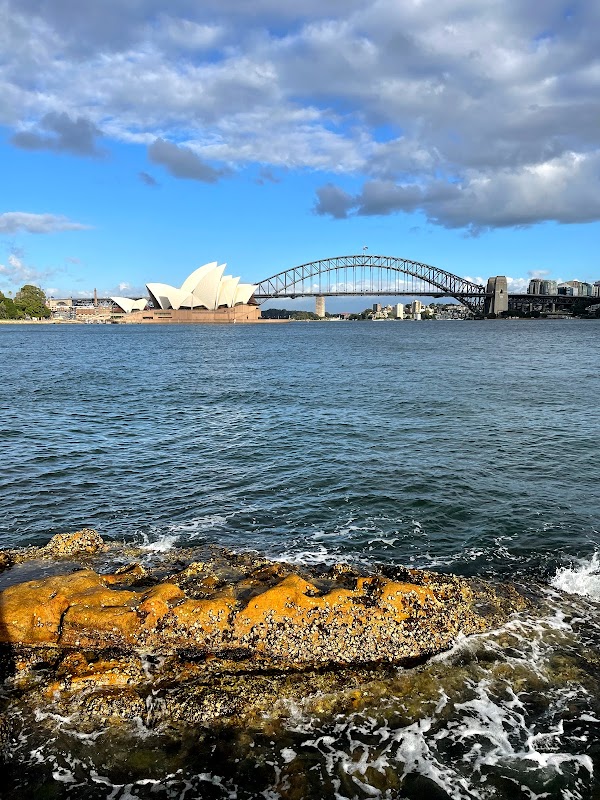 The Royal Botanic Garden, Sydney is a heritage-listed major 30-hectare (74-acre) botanical garden, event venue and public recreation area located at Farm Cove on the eastern fringe of the Sydney central business district, in the City of Sydney local government area of New South Wales, Australia. Opened in 1816, the garden is the oldest scientific institution in Australia and one of the most important historic botanical institutions in the world. The overall structure and key elements were designed by Charles Moore and Joseph Maiden, and various other elements designed and built under the supervision of Allan Cunningham, Richard Cunningham, and Carrick Chambers. The garden is owned by the Government of New South Wales and administered by the Royal Botanic Gardens and Domain Trust. The Botanic Garden, together with the adjacent Domain were added to the New South Wales State Heritage Register on 2 April 1999.The Garden and The Domain are open every day of the year and access is free. Its stunning position on Sydney Harbour, the Sydney Opera House and the large public parklands of The Domain ensure it is one of the most visited attractions in Sydney. The garden is bordered by the Cahill Expressway to the south and west, Macquarie Street to the northwest, Art Gallery Road to the east, and Sydney Harbour to the north. 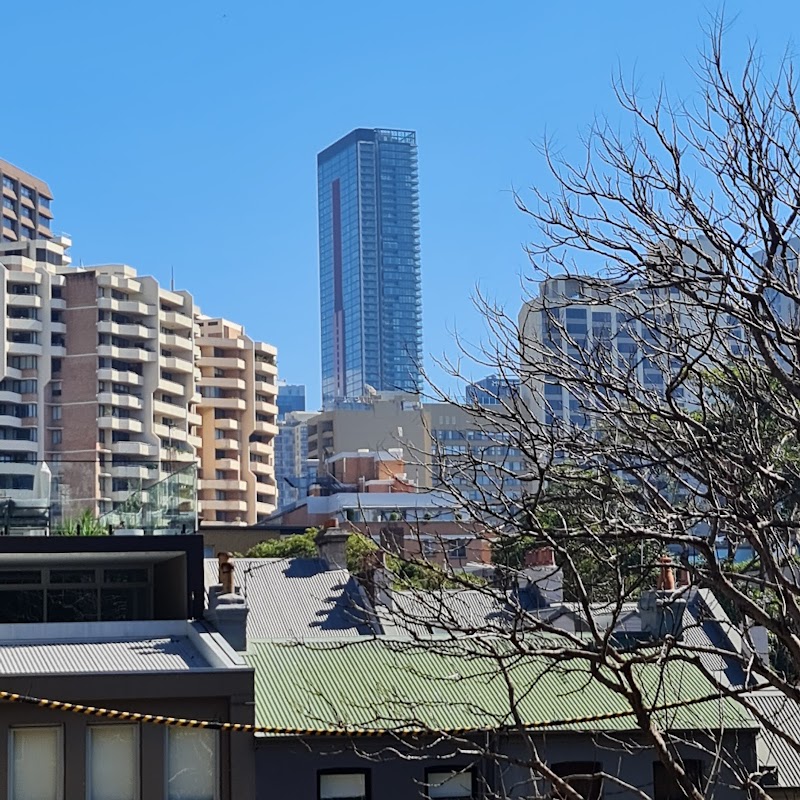 Darlinghurst is an inner-city, eastern suburb of Sydney, New South Wales, Australia. Darlinghurst is located immediately east of the Sydney central business district (CBD) and Hyde Park, within the local government area of the City of Sydney.Darlinghurst is a densely populated suburb with the majority of residents living in apartments or terraced houses. Once a slum and red-light district, Darlinghurst has undergone urban renewal since the 1980s to become a cosmopolitan area made up of precincts. Places such as Victoria Street (which connects Darlinghurst to Potts Point in the north), Stanley Street (Little Italy) and Crown Street (Vintage and Retro Fashion) are known as culturally rich destinations. These high street areas are connected by a network of lane-ways and street corners with shops, cafes and bars. Demographically, Darlinghurst is home to the highest percentage of generation X and Y in Australia. The majority of businesses in Darlinghurst are independently owned and operated small businesses with over 50% of all commercial activity in the area being consumer oriented: indie retail, food, drink, dining, leisure and personal services. Darlinghurst is also home to large number of off-street creative industries.Darlinghurst's main street is Oxford Street. This major Sydney road runs east from the south-eastern corner of Hyde Park through Darlinghurst and Paddington and terminates at Bondi Junction. 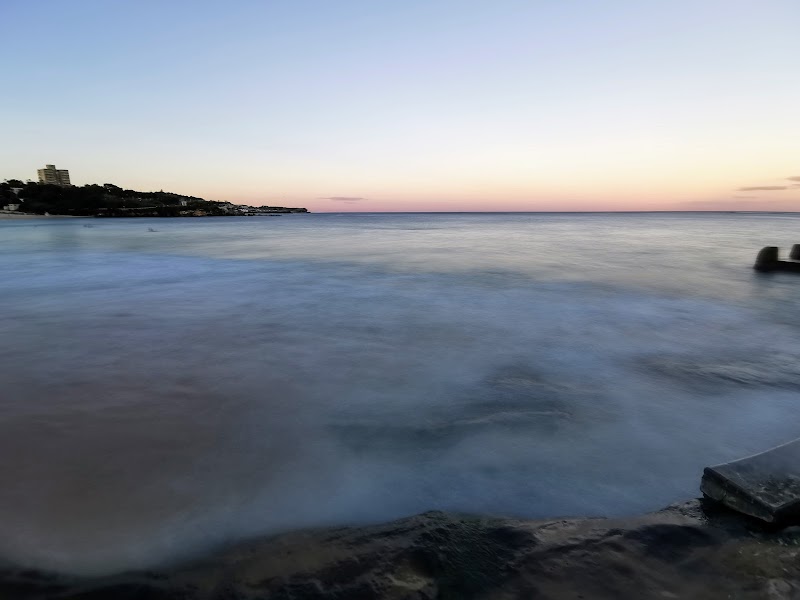 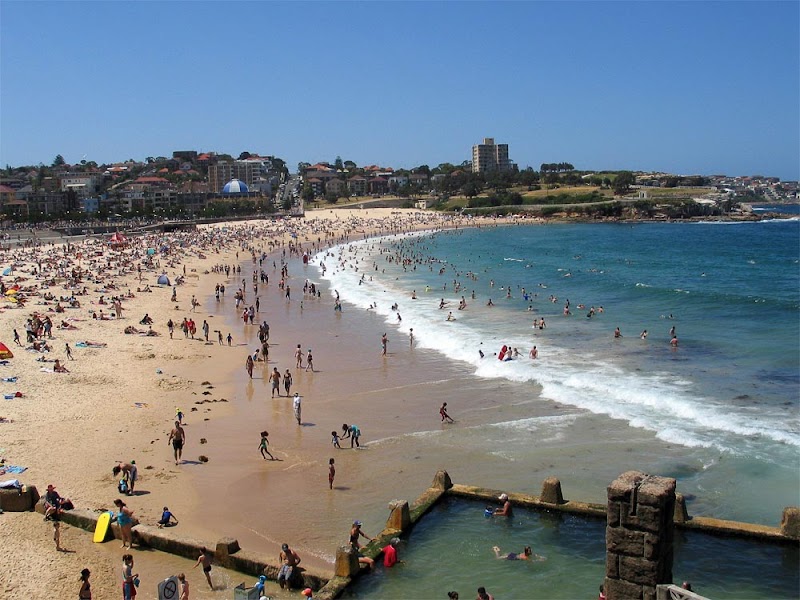 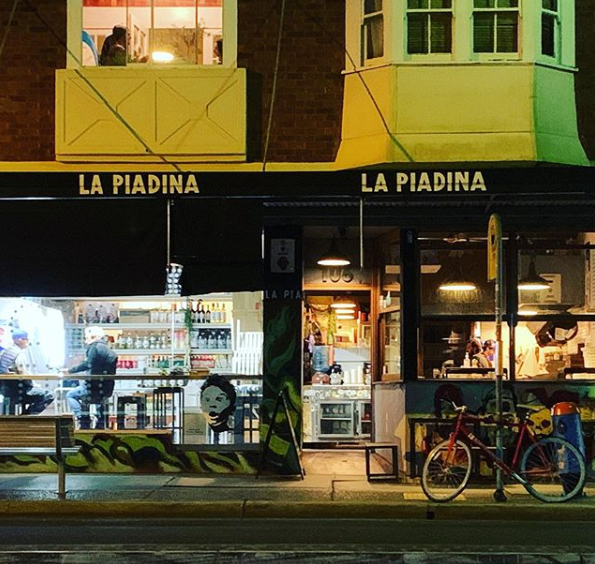 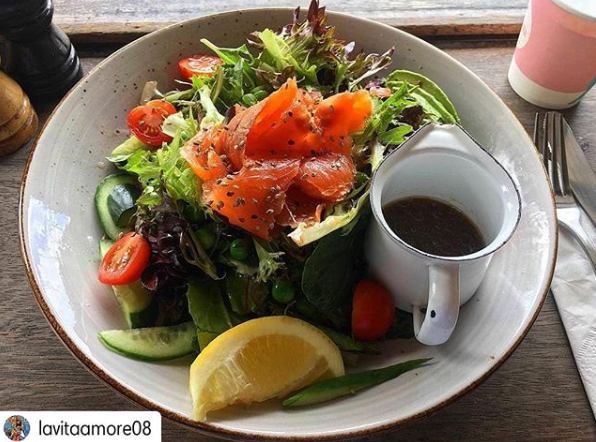 The main street features a ton of hipster and trendy shops, cafes, bars, and restaurants but I wanted to go a little deeper into town to try out this spunky joint called La Piadina where they adamantly don't serve pizza but instead is “Where food, taste and pleasures blend together with plastic dinosaurs and super monsters. Where fresh Italian ingredients get mixed with care and mastery, placed over thin flatbreads, and served to you on custom made wooden boards.“ 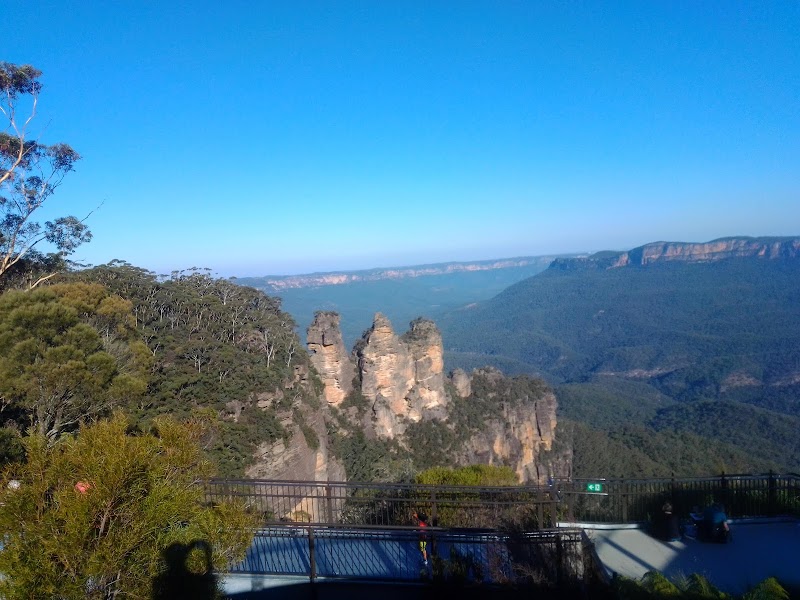 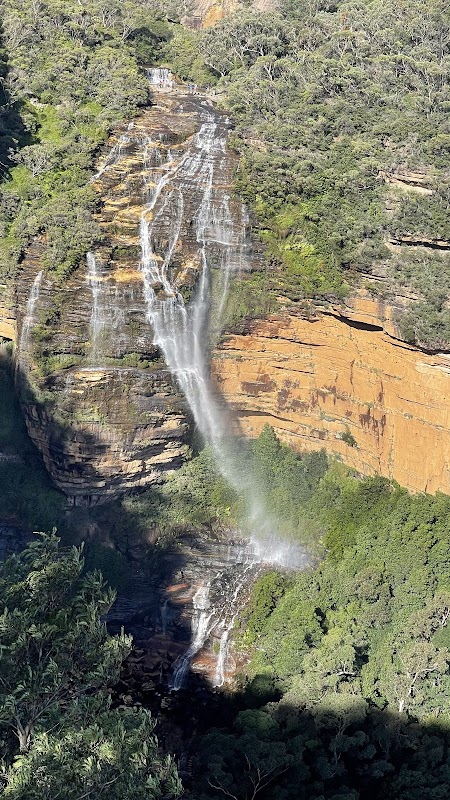 The Blue Mountains are a mountainous region and a mountain range located in New South Wales, Australia. The region borders on Sydney's metropolitan area, its foothills starting about 50 kilometres (31 mi) west of centre of the state capital, close to Penrith on the outskirts of Greater Sydney region. The public's understanding of the extent of the Blue Mountains is varied, as it forms only part of an extensive mountainous area associated with the Great Dividing Range. As defined in 1970, the Blue Mountains region is bounded by the Nepean and Hawkesbury rivers in the east, the Coxs River and Lake Burragorang to the west and south, and the Wolgan and Colo rivers to the north. Geologically, it is situated in the central parts of the Sydney Basin.The Blue Mountains Range comprises a range of mountains, plateau escarpments extending off the Great Dividing Range about 4.8 kilometres (3.0 mi) northwest of Wolgan Gap in a generally southeasterly direction for about 96 kilometres (60 mi), terminating at Emu Plains. For about two-thirds of its length it is traversed by the Great Western Highway and the Main Western railway line. Several established towns are situated on its heights, including Katoomba, Blackheath, Mount Victoria, and Springwood. The range forms the watershed between Coxs River to the south and the Grose and Wolgan rivers to the north. The range contains the Explorer Range and the Bell Range.The Blue Mountains area includes the local government area of the City of Blue Mountains. Since the early 2010s, the region's biodiversity and infrastructure has been severely affected by massive bushfires of unprecedented size and impact. 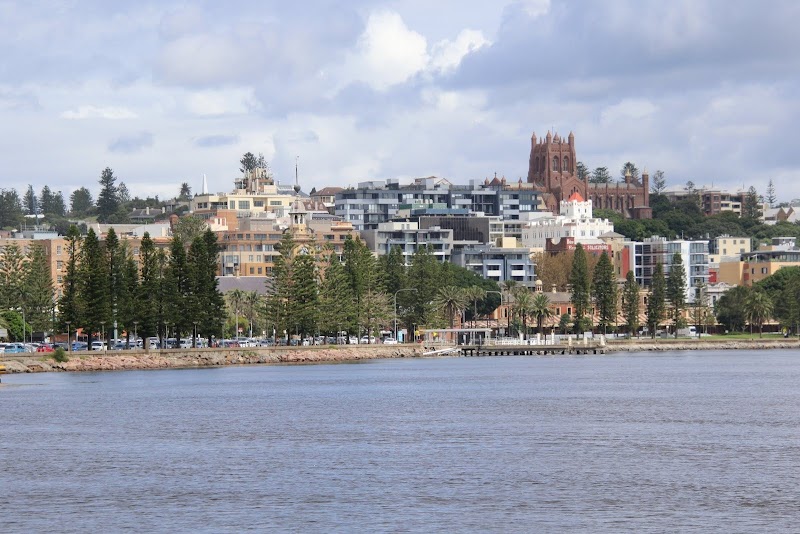 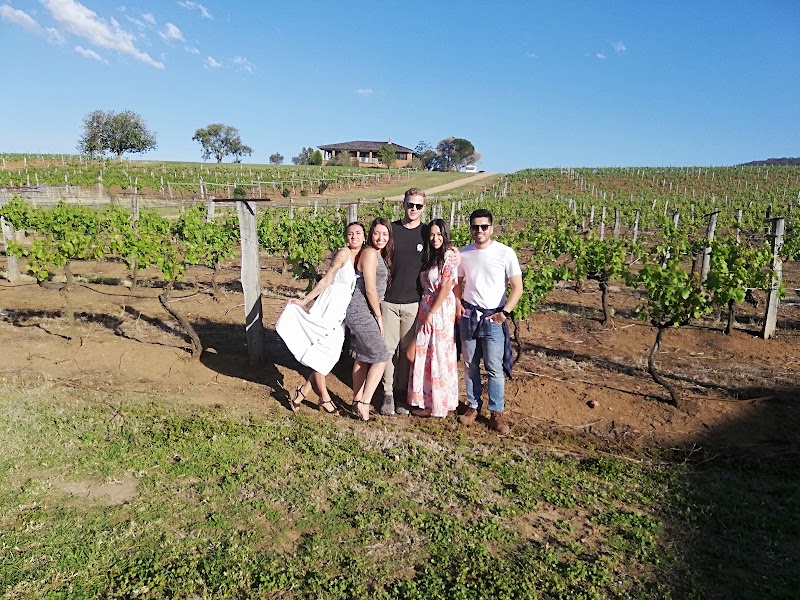 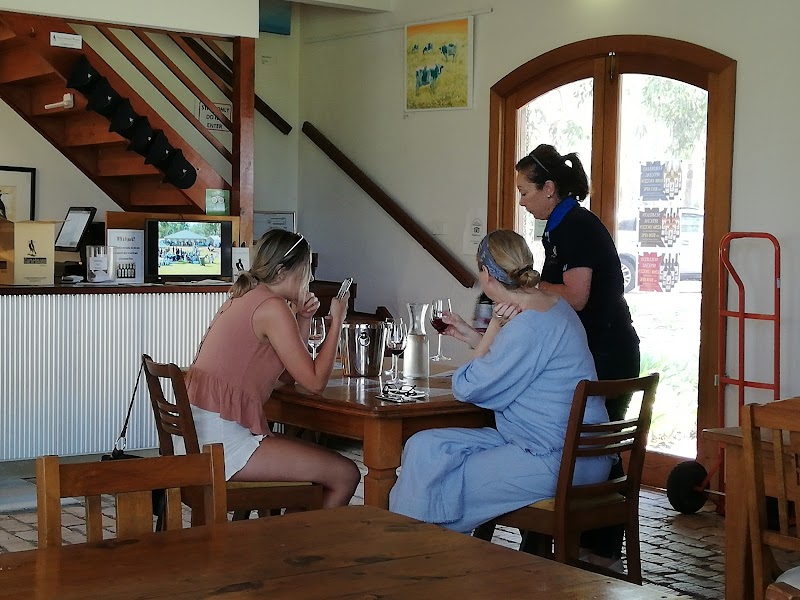 The Hunter Valley is one of Australia's best known wine regions. Located in the state of New South Wales, the region has played a pivotal role in the history of Australian wine as one of the first wine regions planted in the early 19th century. Hunter Valley Semillon is widely considered the iconic wine of the region but the Hunter produces wine from a variety of grapes including Shiraz, Chardonnay, Cabernet Sauvignon and Verdelho.Under Australia's wine appellation system, the Hunter Valley zone Australian Geographical Indication (GI) covers the entire catchment of the Hunter River and its tributaries. Within that, the Hunter region is almost as large, and includes most of the wine-producing areas, excluding the metropolitan area of Newcastle and nearby coastal areas, some national parks, and any land that was in the Mudgee Shire (at the western heights of the catchment). There are three named subregions in the Hunter region. These are the Upper Hunter Valley, Broke Fordwich and Pokolbin subregions. 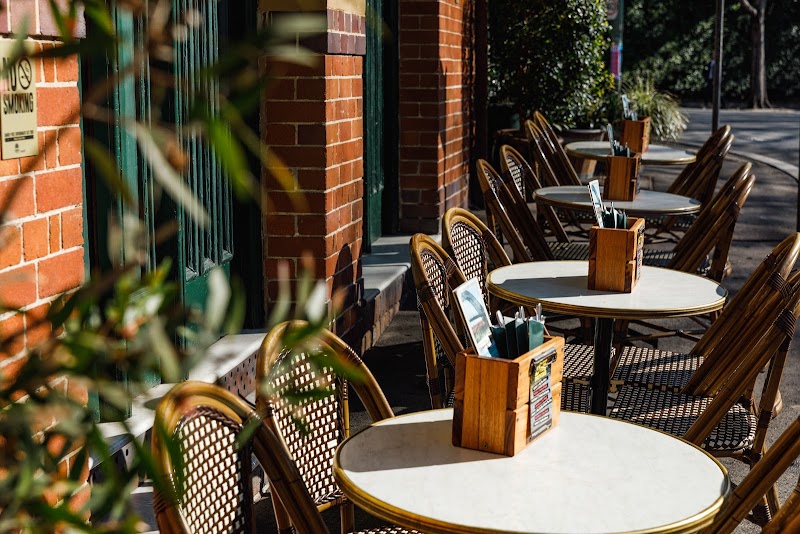 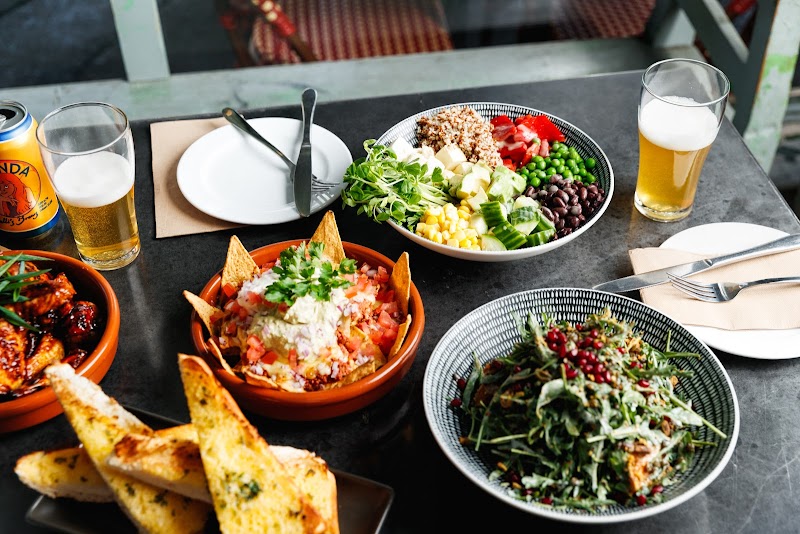 Dates
No of People
Quantity -
Submit
×

Your response has been recorded

Connect to your Adventure Tribe!